A while back I made a couple of resolutions to for the new year.  The most daunting was to play and sing at open mics.  Maybe not the most daunting but the one that made me break out in flop sweat.

The reasons for that particular resolution were simple.  Kids grown and gone – check.  I’m old enough too know better – check.  Why not? – Check.  I mean what’s the worst that could happen?  Make a fool of myself – Check on that one too.

I think that I’ve played about 25 open mic sessions now and they get easier.  I no longer get stage fright but I’m more critical about my singing and playing,  I see and hear things in a whole different light now that I’m playing in public.

I like the thrill  of playing without a safety net.  There are no do-overs.  At one place I play the open mic comes with a house band.  I have invited friends to sit in on my set.  It always helps to play with better musicians backing you up.

At most of these sessions, I’m usually the oldest person in the room.  I remember seeing the Beatles on Ed Sullivan in 1964.

The first time I played the Alley Kat I thought that I had clearly wandered into the wrong place as my set list included ” I Got Rhythm.”  The audience was attentive and appreciative and as I like to think – Every song has a story so I try and include something meaningful about the song or the composer in my intro to the tune.  I think it helps to set me apart from the rockers, the wailers and the guitar heroes. 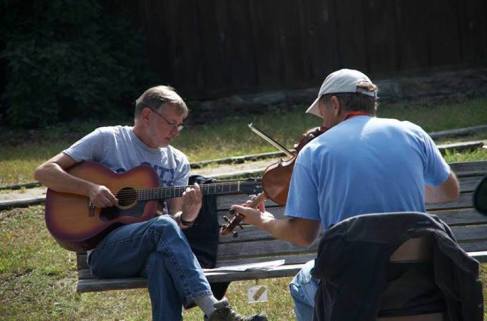 So, in my quest to become fearless in front of an audience I have to remind myself why I’m doing this and that even if sometimes I really don’t think so it’s because deep down inside I really do like it.